Just a quick post this week.
So I have had a burger from Hardee's. They just opened up in Kingston New York.
http://www.hardees.com/menu/charbroiled-burgers
I have to say it was good for a "Fast Food" burger. Think of it as in between Five guys (where I don't really call that fast food. More like made to order) and McDonald's (fast food). It was a nice thick burger for a fair price. It came to about 12.00 for a bacon burger with fries and drink. 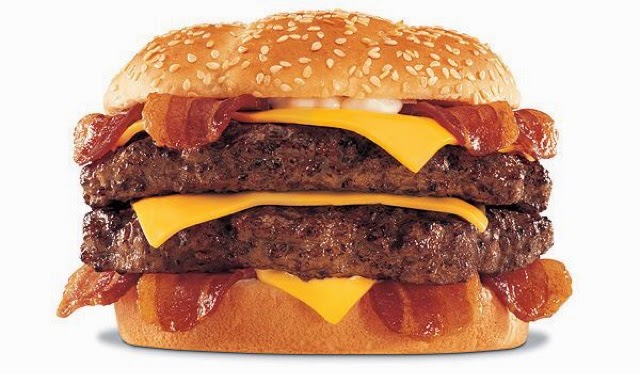 Fries were good as well. Tasted a bit like popcorn. Strange at first but the more I ate the better they got.
Another bonus: Cherry Coke on the menu. Yup. Good stuff there.
Thanks for reading,
-Jay
Posted by Jay at 4:09 PM 3 comments:

Email ThisBlogThis!Share to TwitterShare to FacebookShare to Pinterest
Labels: Hardee's

Sorry I have been out of it for a while. Home life just gets in the way of Burger Time. One thing I would like to talk about today is Burgers, Bacon, and Diners. 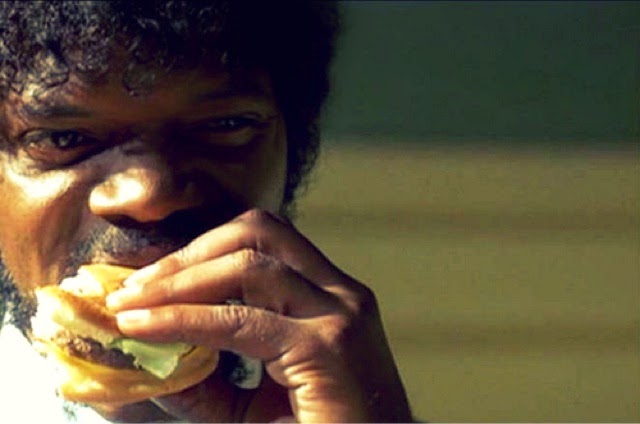 I feel a good burger can make or break a diner. A few weeks ago I had a delicious Bacon Burger at the Millbrook Diner with some friends. Cooked to perfection and piled with real bacon. Throw in that garlic pickle with some ketchup and BOOM! Burger Bliss. An all around good burger. I will say it was a bit pricey at about 12 bucks for a burger and fries but I will go back.
http://millbrookdiner.com/menu---lunch.html
You see that's all it takes. A good burger to keep me coming back. The Red Hook Village Diner is also a great place to grab a juicy burger. The thing I love about this place is that it is right down the street from my house. I can grab the burger and bring it home. It's nice on the nights when you are running late and don't feel like cooking. Again they use real bacon and thick burgers. They do not accept credit cards so bring cash. This kind of sucks for me as I never carry money on me. But 9 bucks for a burger and fries is not bad in my book.
http://www.historic-village-diner.com/PDF/10-15-12HistoricVillageDinerMenu.pdf
There are hundreds of diners in my area. Some good...some not so good. But a burger in my opinion can make or break it.
What diner do you do you go for that awesome burger? Let me know.
Thanks for reading,
Jay
Posted by Jay at 8:16 AM 2 comments:

No burger news this week but here is something cool. This morning on my way into work I stopped at the deli for Bacon Egg and Cheese on a Hard Roll. Looking for something to drink in the coolers, I found a can of Surge. I grabbed it quick and looked at it more closely. Did I step though a temporal warp? Was it 1995 again? Who cares? I had it in my hand and I wanted it. Well I didn't look at the price and I bought it. So at lunch today I cracked the can and poured it out into a clear cup. The color is the same as I remember. The taste is the same. The smell is the same. Now I need to find a place that makes a burger and sells Surge. Then I would have found my time machine. Let your friends know! Awesomeness is back and it's name is Surge. 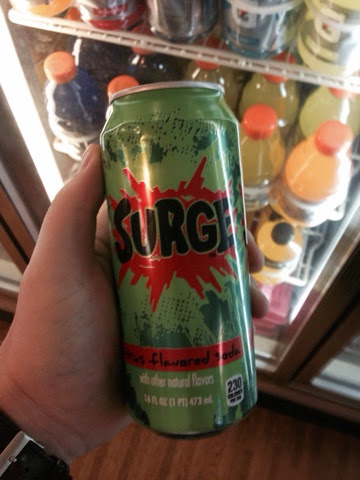 So today I got a burger from BurgerFi in Poughkeepsie by Vassar college. It was really good. A double bacon cheeseburger with pickles and ketchup. Served with hot fresh cut French fries. The cool thing I saw was that the stamp their burger with branding iron on the bun. They do all sorts of burgers and hot dogs. They also serve beer on tap and in bottles. I had a Coke in a glass bottle. Pretty cool. I have not had one of those in a while. The Price is nice too. Double burger with fresh bacon (not pre cooked) with a drink was 10 bucks. A co worker bought the large fry so I snagged a few. It was a good meal and I could see going there again. 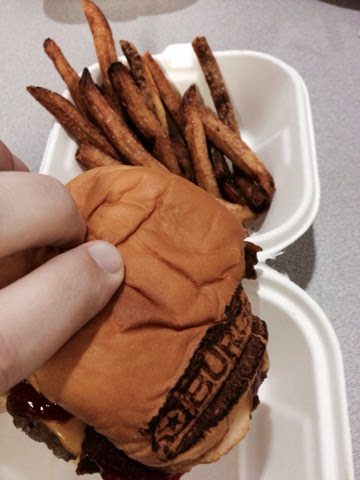 We brought the food back to work and watched the news conference about the Ebola patient in NYC. This started a rousing discussion about how this guy got in to the country and why was he quarantined? What the hell was he doing bowling? I tried to stop them talking about by watch the guy doing sign language and coming up with what I thought they were saying. Something like " A guy came here and got sick, then a bird flew away and it hurt is heart." That's what it looked like he was singing to me. Anyway, stay healthy and full. Till next time, thanks for reading.
Posted by Jay at 10:48 AM 1 comment:

Wimpy said it best " I will gladly pay you Tuesday for a Hamburger today." This is how I feel when I am home on a weekend and I want a Cheeseburger.
Today my wife Morgan and I went to the store to go food shopping. At Hannaford they have these burgers with cheddar and bacon mixed right in the burger patty. Now we picked these babies up and brought them home for dinner. Morgan cooked these things on the barbecue grill. Added some cheddar on the top and cut up some pickles. Better yet we bought some pretzel rolls at the store as well. These things are great, Crusty top with a soft center. Fryed up some onion rings and Morgan out them on hers. I just had the pickle and ketchup with the rings on the side.
During dinner we watched Uncle Buck. I have to say that this has got to be John Candy's best movie. Not bad at $8.50 on BluRay. http://amzn.com/B004ZJZPW0. Just a good all around 80's movie. I love how Buck treats his niece's boyfriend Bug. If you haven't seen this classic gem I suggest you check it out.
Till next time,
-Jay 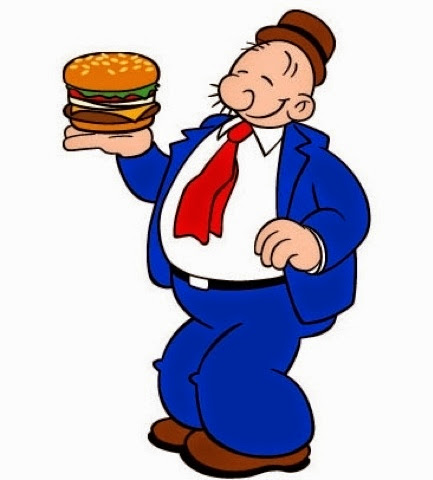 Hi! I'm Jay. I am a thirty-something year old male. I live in New York but not that New York. I live in the Hudson Valley. I grew up here. Small town. Yup, that's me. I have a regular 9 to 5 and married my childhood friend 8 years ago. She is awesome! I love Games (all kinds), movies, tv and music. Mostly just a pop culture loving geek.

Another thing I love is cheeseburgers. Bacon cheeseburgers. I grew up next to Del's Dairy Cream in Rhinebeck New York. Rhinebeck is about 2 hours north of NYC. Del's is a small ice cream and burger place on route 9. It was awesome living right next door to a place like this. I would have to say this was the place that started me on my burger binge. They would be open for the spring and summer and close at the end of September. When I was 13-18 years old I would have a bacon cheeseburger everyday with a vanilla milkshake with rainbow sprinkles or a large Surge. Do you remember Surge soda? Oh man. Good stuff.
My parents ran the place so the food was a good price...free. It was good to be a teen. The summer I turned 16 I started working in the kitchen. I started working the firer where I was cooking fries, onion rings, mozzarella stix, clams, poppers and mushrooms. My dad was on the grill making burgers, hot dogs, chicken sandwiches, gyros and steak sandwiches. It was awesome. The "John Burger" as it was called in certain circles was one of the best 1/4 burgers I have ever had. Garlic pickles disks, round bacon, melted white American cheese on a hamburger bun with ketchup. Man, my mouth is watering writing this right now. In 1999 my parents left the business. Del's is still there now but to me it is not the same. For one it just doesn't have the same taste and the second thing is it is no longer free. One day I will go back and try it again.

So that's my start in the world of bacon cheeseburgers. Every restaurant that sells a burger I order the my burger the same way. Cooked medium with bacon, American, pickles and ketchup. Stay tuned to this blog for burger reviews from anywhere and everywhere I eat a burger. Also, if you have had an awesome burger in your life comment below and let me know.